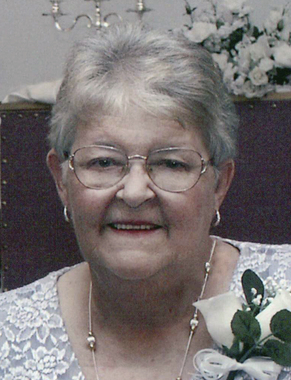 Back to Carol's story

Carol Ann Vass, age 85, of Lindside, WV, passed away on Saturday, February 22, 2020, at the Carilion Giles Community Hospital in Pearisburg, VA.
Born February 18, 1935, in Lindside, WV, she was the daughter of the late Herbert W. and Anna Lee Long Mann.
Carol was a member of the Lindside United Methodist Church, a member of the Lindside Community Education Outreach Services (CEOS), and formerly worked at Celanese in Narrows, VA. Alongside her husband, Kenneth, Carol worked for many years building up their construction company, K.L. Vass, which they started in 1960. She was a dedicated and loving wife, mother, grandmother, sister, and friend.
In addition to her parents, she was preceded in death by her husband of 65 years, Kenneth L. Vass; one son, Michael Vass; and one brother, Van Mann.
Survivors include one daughter, Connie Thomas and husband Will of Lindside, WV; one son, Nathan W. Vass of Columbus, OH; one brother, Herbert L. Mann and wife Betty of Cornelius, NC; four grandchildren; Philip Thomas, Mary Anne Perdue, Tyler Vass, and Chandra Burks; and eleven great grandchildren, Kylie, Emma, Lexi, Jase, Landon, Lilly, Layla, Paisley, Katlyn, Courtney, and Alyssa.
Funeral services will be held at 11:00 AM on Friday, February 28, 2020, at the Lindside United Methodist Church in Lindside, WV, with Pastor Brent Brown and Pastor Becky VanStavern officiating. Burial will follow at Swope Cemetery in Lindside, WV. Visitation will be from 6:00 PM until 8:00 PM on Thursday, February 27, 2020, at Broyles-Shrewsbury Funeral Home in Peterstown, WV, and one hour prior to the services on Friday at the church.
Philip Thomas, Tyler Vass, Stephen Mann, McCreery Mann, Kenny Hines, and Melvin Young will serve as pallbearers; Frank Wills and Dossie Williams will serve as honorary pallbearers.
Online guestbook can be signed or condolences may be sent to the family at www.broyles-shrewsbury.com.
Arrangements by Broyles-Shrewsbury Funeral Home, Peterstown, WV.
Published on February 26, 2020
To plant a tree in memory of Carol Ann Vass, please visit Tribute Store.

Plant a tree in memory
of Carol

A place to share condolences and memories.
The guestbook expires on May 26, 2020.

Be the first to share a memory or condolence.