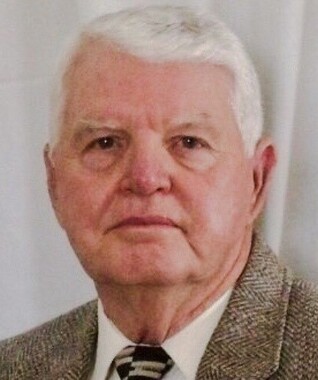 Back to Chester's story

Chester James Burrell, 77, of Corrine Street, Princeton, WV, formerly of Mullens, died peacefully Monday, December 17, 2018 at his home.
Born September 22, 1941 in Herndon, he was the son of the late Clyde and Annabelle Hollar Burrell.
Chester was a 1961 graduate of Herndon High School. After graduation he served his country proudly in the U.S. Air Force.
Following his service, Chester would retire as an engineer with Norfork/Southern with over 30 years of service. After retirement, Chester and his wife Patricia enjoyed traveling in their motor home to various states.
In addition to his parents, he was preceded in death by his father and mother-in-law, Cloyd and Kathleen Parker.
He will be lovingly remembered by his wife of 52 years, Patricia Burrell;
Brother-in-law, Sherrill Parker; Nephews, Ryan and Scott Parker, and his loving and faithful four-legged companion, Gabby.
Graveside services will be held at 1:00 P.M. Thursday, December 20, 2018 in the Chapel of Wildwood Mausoleum of Roselawn Memorial Gardens in Princeton, with Pastor Larry Roberts officiating. Entombment will follow. Those wishing to attend the services are requested to meet at the Mausoleum by 12:45 P.M.
Online condolences may be shared with the family via www.memorialfd.com.
The Burrell family is being served by the Memorial Funeral Directory and Cremation Center on the Athens Road in Princeton.
Published on December 18, 2018
To plant a tree in memory of Chester James Burrell, please visit Tribute Store.

Plant a tree in memory
of Chester

A place to share condolences and memories.
The guestbook expires on March 18, 2019.