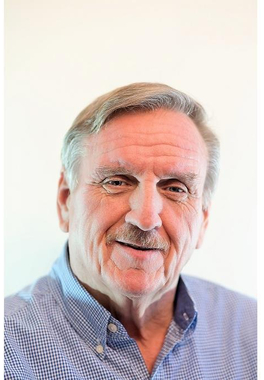 Delbert Lee Johnson, Jr., 71, of Hurricane, WV passed away Saturday December 7, 2019 at Bowers Hospice House in Beckley, WV surrounded by his family. Delbert, the son of the late Delbert Lee Johnson, Sr. and Betty (Hazlewood) Johnson was born in Winfield, April 9, 1948. In addition to being survived by his mother Betty, he is also survived by sons Jason (Janet) of Bowie, MD; Jeremiah of Beckley, WV; Justin (Jennifer) of Roanoke, VA; and eight grandchildren: Emma, Lily, Mara and Jude Johnson of Bowie, MD; Camden Johnson of Beckley, WV; and Jackson, Joshua and Jordyn Johnson of Roanoke, VA. He is also survived by brother Robert (Terri) of Scott Depot, two nieces, Michelle (Travis) Craig and Jaclyn Johnson, lifelong best friend, Bob Edwards of Culloden, girlfriend, Rebecca Nossaman of Hurricane and many close friends and relatives.
Delbert was a 1966 graduate of Hurricane High School and served in the United States Air Force. He developed a passion for electronics while serving in the Cold War Era USAF Strategic Air Command and received training that would carry him into his career. For over 40 years, Delbert owned and operated his business as an electrical contractor. By the late 1980's his business became known as Alarmtronics Security, as he transitioned into selling and servicing alarm systems. As a small business owner, Delbert had hundreds of customers and knew many people throughout southern West Virginia; always personable he didn't know a stranger.
Delbert was of Christian faith and a member of First Baptist Church of Hurricane. Woodworking was Delbert's favorite hobby. He was a former President of the Valley Woodworkers of West Virginia. Delbert always looked forward to traveling with his friends to woodworking shows. He made several furniture pieces for friends and family, including baby cradles for his grandchildren.
Visitation will be held Friday December 13, 2019 from 6:00 - 8:00 pm at Allen Funeral Home on Main Street, Hurricane. Funeral services will take place Saturday, December 14 at 11:00 am at Allen Funeral Home with Pastor Ray Witmer, III officiating. Family will also receive friends one hour prior to the service. Interment will follow at Valley View Memorial Park in Hurricane.
In lieu of flowers, memorial donations may be made to Valley Woodworkers of WV, VWWV Treasurer, 23 Edgewood DR, Hurricane WV 25526 or Hospice of Southern WV, 454 Cranberry Drive, Beckley, WV 25801.
Published on December 10, 2019
To plant a tree in memory of Delbert Lee Johnson Jr., please visit Tribute Store.

Plant a tree in memory
of Delbert

A place to share condolences and memories.
The guestbook expires on March 09, 2020.

Bud Davis
Rest in peace my friend...
View all