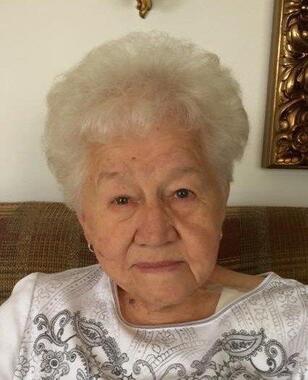 Glemma J. Fink, 84, of Princeton, died Wednesday evening, October 31, 2018 at the Bowers Hospice House, following a long illness.
Born February 20, 1934 at Dott, she was the daughter of the late Frank Huffman & Dossel Meadows Huffman.
Glemma was educated in Mercer County, she was a former employee for Rockwell International in Princeton. She was a very active member of the Princeton Church of God on the Oakvale Road in Princeton where she served on various committees throughout the life of the church.
Glemma was a devoted Christian, wife, mother, grandmother & great grandmother.
Due to her illness, she was unable to receive visitors and friends at the Bowers Hospice House, she was so appreciative for all the cards, letters and prayers she received during the final stage of her life.
Her family wishes to express their sincere appreciation to Dr. Rowena Chambers and her staff, and the wonderful staff at the Bowers Hospice House in Beckley.
In addition to her parents, she was preceded in death by her husband Herbert S. Fink Jr., a son, Richard Anthony Fink, and her four siblings, Lena Faye King, Elva Maxine Holloway, Paul C. Huffman & James E. Huffman.
Those left to cherish her memory, her three children and their spouses, Michael & Judy Allan of Wilmington NC, Rodney & Joanie Fink of Daniels, Kimberly Ann & Les Thomason; eight grandchildren; Christopher & wife Sarah, Sheena, Andrea & husband Wes, Les & wife Nikki, Corey, Austin, Michael, & Kalie. Five great grandchildren, Alexander, Dawson, Tristen, Tyler, & Arianna. One great great grandchild, Karter. And a host of nieces and nephews.
Graveside services will be held 11:00 A.M. Saturday, November 3, 2018 at Roselawn Memorial Gardens in Princeton.
There will be no visitation at the funeral home.
Those wishing to attend are requested to meet at the Memorial Funeral Directory on the Athens Road in Princeton Saturday by 10:45 A.M.
Online condolences may be shared with the family via www.memorialfd.com
The Fink Family is being served by the Memorial Funeral Directory & Cremation Center on the Athens Road in Princeton.
Published on November 1, 2018
To plant a tree in memory of Glemma J. Fink, please visit Tribute Store.

Plant a tree in memory
of Glemma

A place to share condolences and memories.
The guestbook expires on January 30, 2019.