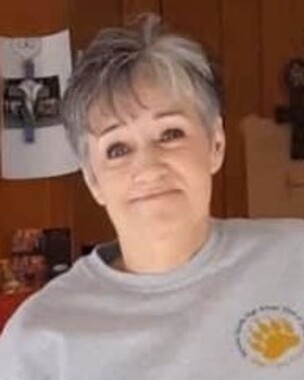 Back to Mona's story

Mona L. Morgan Frontino, 58, of Summersville, WV, passed away at Ruby Memorial Hospital in Morgantown on Sunday, January 12, 2020.
Born December 17, 1961 she was a daughter of Aaron and Josephine Ward Morgan. She was also preceded in death by her brother, Billy Morgan.
She was a member of the Saint John's Catholic Church in Summersville, was a graduate of Mullens High School, and was a former employee of Big Lots at Mullens and the Wyoming County Courthouse at Pineville.
Survivors include her husband, Mark Frontino; children, Sierra Tilley of Mullens and April Derieux of Laurel Fork, VA; two stepsons, Andrew and Anthony Frontino, both of Summersville; one sister, Regina Sizemore of Saulsville; one brother, James Morgan of Pierpoint; seven grandchildren.
Mass of Christian Burial will be held at 12:00 (noon) on Thursday, January 16, 2020 in the Saint John's Catholic Church at Summersville with Father Zavier Cooney and Pastor John Morgan officiating. Interment will follow in the Walker Memorial Park at Summersville.
Friends may call at the White Funeral Home at Summersville on Thursday from 10:00 a.m until 11:30 a.m.
Condolences may be sent to the family at www.whitefuneralhomewv.com
Published on January 14, 2020
To send flowers to the family of Mona L. Morgan Frontino, please visit Tribute Store.

Send flowers
in memory of Mona

A place to share condolences and memories.
The guestbook expires on April 13, 2020.

Mona was a good friend loved her

Jackie Lewis Houchins
Sorry to hear about Mona. We were classmates in high school. Prayers for the family .
Kim Halsey Blankenship
I was very sad to hear of this! Mona and I were close friends in high school. We shared many happy memories and she will always have a special place in my heart. May her soul rest in peace.
Ruby 'Mills' Echols
So sorry to hear this. We were classmates and freinds in school. You'll be missed.
Cathy wilox
May God be with you all and grant you peace and comfort!! Mona was a wonderful person! Love and prayers!!
Terry and Tammy Saunders
We were so sorry to hear of Mona's passing. We pray for God's comforting Hand of peace for the family during the days ahead.
Tami Sluss Ashley
So very sorry to hear about Mona! My thoughts and prayers and love are with James and the rest of the family.
Ann Lawson
I am so sad. I use to work with Mona at the courthouse. She was a special lady. Prayers go out for her family.
Cricket Tilley I loved you you was all ways good to me I will miss you all ways till we meet again
Mona I will miss you all ways Love you all ways till we meet again in that beautiful place called heaven were there will never be any more pain love you cricket
Cannon
Such a special lady! Couldn't have been a better human to me & my Mother. We all miss you Mona!
Geraldine Brantley
My thoughts and prayers are with you during this time of loss and the days that follow. May Help d bless you with strength, comfort and peace. Mina and I had been friends for years I have such great memories of her. Mona was such a caring person with a heart of gold.
View all