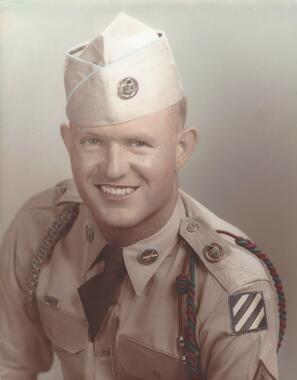 Back to Paul's story

Paul Caperton, 87, of Pipestem died Saturday, December 22, 2018, at Springfield Center in Lindside.
Born in Pettry, he was the son of the late Daniel Clarence and Bessie Odell Easter Caperton.
Paul previously worked for General Motors in Flint, Michigan, Hercules in Covington, Virginia, and retired from Pipestem State Park. He was a U.S. Army veteran and a member of the Cook's Chapel Baptist Church in Pipestem.
In addition to his parents he was preceded in death by his son, Benny Paul Caperton, two sisters Pauline Blankenship and Ruby Clemons, and two brothers, Wesley and Hershel Anderson.
Survivors include his wife of 62 years, Margaret Lucille Houchins Caperton.
Daughter, Jennifer Caperton Belcher and husband Kevin of Peterstown.
Grandchildren, Victoria, Chase and Whitney Belcher.
Sisters, Gay Pennington and husband Jimmy of Burton, Michigan, and Anna Lee Meadows of Green Springs. Several nieces and nephews.
Services to celebrate the life of Paul Caperton will be held 2:00 P.M. Wednesday, December 26, 2018, from the Cook's Chapel Baptist Church, Pipestem, with Pastor Dallas Peyton, Jr., officiating. Burial will follow in Houchins Family Cemetery with military honors conducted by the West Virginia National Guard Honor Guard.
John Allen, Greg Weatherly, Benny Dickenson, Jimmy Spangler, Tom Worley and Rocky Mansfield will serve as pallbearers. Friends may visit with the family Wednesday from 1:00 PM until the service hour at the church.
Online condolences may be shared with the family via www.memorialfd.com The Caperton Family is being served by the Memorial Funeral Directory and Cremation Center on the Athens Road in Princeton.
Published on December 23, 2018
To plant a tree in memory of Paul Caperton, please visit Tribute Store.

Plant a tree in memory
of Paul

A place to share condolences and memories.
The guestbook expires on March 23, 2019.